And grieve you not for them, nor be straitened (in distress) because of what they plot. And they (the disbelievers in the Oneness of Allah) say: “When (will) this promise (be fulfilled), if you are truthful?” Say: “Perhaps that which you wish to hasten on, may be close behind you. [Surah An-Naml. Aayaat 70-72] – Meaning, O Muhammad! Do not be grieve regarding the affair of these beliers and their lack of belief, for indeed if you knew the evil that is within them and that they are not worthy of any good, then neither would you despair nor grieve, neither would your heart be straitened nor would your soul worry about their plotting, for indeed the outcomes of their plotting will return to them. [وَيَمۡكُرُونَ وَيَمۡكُرُ ٱللَّهُ‌ۖ وَٱللَّهُ خَيۡرُ ٱلۡمَـٰڪِرِينَ   – they were plotting and Allah too was planning, and Allah is the Best of the planners]. [Ref 1]

The Liars Are Always Exposed

Imaam Ibnul Qayyim [rahimahullaah] said: The fact that a statement regarding something is lies and falsehood is sometimes known based on the statement in and of itself, its contradictions, perplexity and the manifestation of those clear indications which shows that it is lies. Lies might be manifested based on what it is in reality, manifested based on what is apparent and what is being concealed. It is sometimes known based on the situation of the utterer of the lie, for indeed the one who is known for lying, wickedness and deception, his statements do not show anything else except a state of conformity with his deeds. He does not utter a statement or perform an action similar to that of a pious and truthful person – the one innocent of every evil, deception, lie and wicked behaviour; rather the heart, intention, statements and deeds of the truthful one have the same image; and the heart, statements, deeds and intentions of the liar have the same image. [Ref 2] 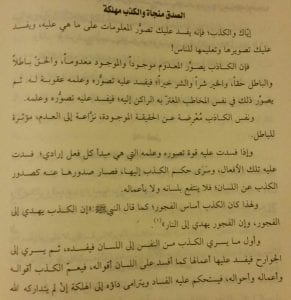 The Imaam [rahimahullaah] stated that one should beware of kadhib [lying], for indeed it corrupts one’s ability to illustrate information based on what it should be in reality. It corrupts one’s ability to illustrate information and his ability to teach the people. The liar portrays what is non-existent as something present and what is present as something non-existent. He portrays truth as something false and falsehood as something true; he portrays good as evil and evil as good, so this corrupts his conception and knowledge, which then becomes a punishment upon him. Then he portrays what is not true to the one deceived by him – the one who is inclined towards him- so he corrupts his conception and knowledge. The soul of the liar turns away from the existing reality -inclined towards what is non-existent and gives preference to falsehood.

And when his conception and knowledge is corrupted, which is the basis of every wilful chosen deed, his deeds become corrupt and marked by lies, so those deeds would emanate from him just as lies emanate from the tongue- he neither benefits from his tongue nor his deeds. This is why lying is the basis [or foundation] of immorality, just as the Prophet [sallal-laahu-alayhi-wasallam] said, “Indeed lies lead to immorality [or wickedness] and indeed immorality [or wickedness] leads to the fire. [Bukhaari 2606/2607]

Firstly lies emerges from the heart and then on the tongue, so it corrupts it; then it transfers to the limbs and corrupts its actions, just as it corrupts the statements of the tongue. Therefore, lying prevails over his statements, deeds and state of affairs; corruption becomes deeply rooted in him and its disease leads to destruction if Allaah does not grant him cure him with the medication of truthfulness, which uproots its (i.e. lying) from its original source.

Allaah punishes the liar by preventing him from those affairs that will bring him well-being and benefit, and He rewards the truthful one by granting him the ability to attain the beneficial affairs related to the worldly life and afterlife. There is nothing similar to truthfulness with regards to the manner in which it bring about the affairs of wellbeing in this life and the next, and there is nothing similar to lying with regards to the manner in which it corrupts and harms one’s worldly affairs and the afterlife. [Allaah (The Most High) said]: [ يَا أَيُّهَا الَّذِينَ آمَنُوا اتَّقُوا اللَّهَ وَكُونُوا مَعَ الصَّادِقِينَ – O you who believe! Be afraid of Allah, and be with those who are true (in words and deeds) [9:119] [هَٰذَا يَوْمُ يَنْفَعُ الصَّادِقِينَ صِدْقُهُمْ ۚ- This is a Day on which the truthful will profit from their truth. [5:119] [ فَإِذَا عَزَمَ الْأَمْرُ فَلَوْ صَدَقُوا اللَّهَ لَكَانَ خَيْرًا لَهُمْ – And when the matter (preparation for Jihad) is resolved on, then if they had been true to Allah, it would have been better for them. [47:21]

And those who made excuses from the Bedouins came (to you, O Prophet) asking your permission to exempt them (from the battle), and those who had lied to Allah and His Messenger sat at home (without asking the permission for it); a painful torment will seize those of them who disbelieve. [9:90] [Ref 3]

It used to be said that whoever perpetrates these three acts  will be haunted by them:

[1] Rebellion against Allaah’s commandments.  Allaah [The Most High] said:

[فَمَنْ نَكَثَ فَإِنَّمَا يَنْكُثُ عَلَىٰ نَفْسِهِ – Then whosoever breaks his pledge only breaks it to his own harm]. [Soorah Al-Fath: Ayah: 10] [Ref 4]

Analysing The Plots of The Disbelievers – A Fard Kifaayah

So it is not permissible for the Ulamaa to remain heedless of their plans (i.e. the enemies of Islaam), their actions, their publications, their missionary activities and their various calls (to the Muslims). And also the various poisons they are infusing – which are in opposition to the Quraan and the Messenger (sallallaahu alayhi wasallam) and his Sunnah. And nor of what plans they have for (the destruction of) the beliefs and methodologies of Islaam. It is not permissible either, to remain heedless of their concentrated efforts to Christianize or secularize the Muslim youth. And along with that, the Muslim youth and the students are not able to oppose this plan and strategy. Rather it is necessary that the distinguished Ulamaa – those who are experienced and shrewd – it is for such people, in all the places to undertake this duty. So it is obligatory for some of the intelligent and ingenious people from the field of Aqeedah to be mobilised for opposing these plans. And likewise it is a must that the intelligent and distinguished from amongst the specialists in the Sunnah – that they be mobilised for the refutation of these and similarly the eminent and distinguished from amongst those in the fields of Orientalism for the refutation of the plans of the Orientalists.” (Ahl ul-Hadeeth, p.102)

He also says: “I myself believe that it is a benefit – rather it is of necessity – that we know what the enemies are planning for us, and that it is necessary for us to prepare (ourselves in strength) to destroy their plans. However, I do not exaggerate in this matter, rather my view is the view of our Ulamaa and they have all agreed upon this – that amongst the obligatory matters there are some that are Fard Ain and others that are Fard Kifaayah – and even if knowing the state of the enemies is harmful – it is still necessary for us to know it – but it is treated as Fard Kifaayah. When some attend to it, then the harm is removed from the rest” up until he said: “So I consider that there is no criticism for the Ulamaa and the students of knowledge who take great concern for preserving the Sharee’ah of Allaah – in terms of the Book, the Sunnah and its understanding – for this is one of the duties of the Kifaayah actions. And I believe that these people are more superior, noble, truthful and of more benefit to Islaam than those who are weak in their knowledge of the religion of Allaah or those who have no share in acquainting themselves with it.”  [An excerpt from an article at www.salafipublications.com titled: The Salafis and Looking into the Affairs of the Ummah]