Everyone with a bit of [uncorrupted] intellect knows that indeed the corruption of the world and its ruin occurs due to giving precedence to opinion over the divine revelation and [evil] desires over sound intellect. These two corrupt motives [or basis] are neither entrenched in a heart, except that its destruction becomes inevitable nor in a nation, except that its affairs are completely corrupted. [Ref 1] 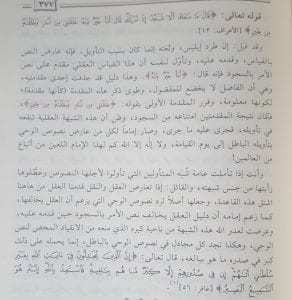 Imaam Ibnul Qayyim [rahimahullaah] said: It has been stated that the reason behind Iblees being distanced [from the mercy of Allaah] is because of false interpretation, for indeed he made an analogy with the text and gave precedence to the analogy over the text. He made a false interpretation about himself and that  [his so called] rational analogy takes precedence over the command to prostrate. [Allaah informed us that Iblees said]: [أنا خير منه – I am better than him [i.e. Aadam], and that a virtuous one cannot humble himself to one who has been given virtue over him; therefore he quickly said [as Allaah informed us that Iblees said]: [خلقتني من نار وخلقته من طين – You created me from fire, and him you created from clay].

Therefore, he thought that this rational analogy that resembles truth- even though it is false – will benefit him in his false interpretation. So, that which happened him happened and he became the leader of everyone- until the day of judgement- who makes a false interpretation of the texts of the revelation. How many a person in this world are followers of this cursed leader! And if you contemplate on the majority of those doubts that are made to resemble the truth by the false interpreters of the texts and seeking to nullify them, you will find that it is similar to the doubts of Iblees which he seeks to portray as truth.

Verily, those who dispute about the Ayat (proofs, evidences, verses, lessons, signs, revelations, etc.) of Allah, without any authority having come to them, there is nothing else in their breasts except pride [to accept you (Muhammad ) as a Messenger of Allah and to obey you]. They will never have it (i.e. Prophethood which Allah has bestowed upon you). So seek refuge in Allah (O Muhammad from the arrogants). Verily, it is He Who is the All-Hearer, the All-Seer. [Surah Ghaafir. Aayah 56] [Ref 2]

And even though there is something in the paths of analogical reasoning and reflection that will lead to knowledge, however sometimes it cannot give detail explanation in a dispute between the people of the earth due to the minute details and ambiguities [in that dispute], and at other times due to the fact the people differ when prioritising necessities. Therefore, due to this Allaah [The Most High] commanded [us] to return to the revelation in times of dispute. Allaah [The Most High] said: [ كَانَ ٱلنَّاسُ أُمَّةً۬ وَٲحِدَةً۬ فَبَعَثَ ٱللَّهُ ٱلنَّبِيِّـۧنَ مُبَشِّرِينَ وَمُنذِرِينَ وَأَنزَلَ مَعَهُمُ ٱلۡكِتَـٰبَ بِٱلۡحَقِّ لِيَحۡكُمَ بَيۡنَ ٱلنَّاسِ فِيمَا ٱخۡتَلَفُواْ فِيهِ‌ۚ -Mankind were one community (i.e. upon Tawheed and Allaah’s Sharee’ah) and Allah sent Prophets with glad tidings and warnings, and with them He sent the Scripture in truth to judge between people in matters wherein they differed]. [Surah Al-Baqarah’ Aayah 213] Therefore, Allaah [The Most High] designated the revealed Books [i.e. the Qur’aan being the final of them] as the judge between the people in matters wherein they differ. [Ref 3]

[Ref 2: [Ref 2: An Excerpt from ‘As-Sawaa’iq Al-Mursalah 1/371-372’. Slightly paraphrased. Your feedback is welcome to improve the content of this article Baarakallaahu]